Silence, a sexist way of behaving 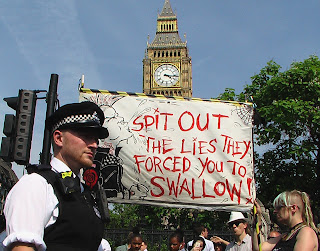 [UPDATED Since first published -> formidable & predictable (and typical) “women’s interest” answer from Florian Reynaud @ Le Monde the day following this post (picture below my signature) + RT on Télérama on 4 July 2017 + RT on Les Inrocks on 7 July 2017! Mocking most probably sexual harassment I suffered from EmmanuelTellier.
11 December 2017, Christmas season (ideal time for Christmas shopping), Florian Reynaud is sent back to London.
Shamelessly, in a rather febrile English, Twits a victims relative A. Chaoui (found on BBC News 'Diverse panel' or The Guardian's Grenfell victims' family) asking if they both can discuss / meet up!
2 May 2018, Florian Reynaud even promotes my aggressor via #RomainJeanticou @ #Telerama https://twitter.com/romainjeanticou/status/991600772319268864 > see pix 2 May below signature;

On 21 December 2018, I observed Florian Reynaud returning to writing on video games https://twitter.com/Sybillebbldnrbt/status/1076203719790915585, which original TW went totally invisible... Usually, journalist Isabelle Rey-Lefebvre writes on housing for Le Monde.
In November 2018, Allan Kaval wrote on the insalubrities of a Parisian suburb building, hence my question on why send a game expert in London to write on Grenfell Tower when he doesn’t cover similar topics in France!
8 February 2019, Libération reveals the nasty existence of La Ligue du LOL which Alexandre Lechenet, friend of Florian Reynaud, was part of (see black picture below). New York Times wrote about it on 12 Feb 2019
Will Florian Reynaud celebrate the Grenfell Tower's tragedy for its two year anniversary in June 2019? I bet he will!
2021: Florian Reynaud is no longer writing on video games ('punishment' over), he has a promotion "Journaliste @lemondefr, service@pixelsfr, division cyber. Mail : freynaud at lemonde et florianreynaud at protonmail" (as seen from his Twitter bio)
2021: Michael Szadkowski, stealing my contacts & encouraging Florian Reynaud to rape my text on Grenfell Tower (see 4th photo below) has been promoted to Director/Editor to French HuffPost!
Le Monde's directors Jerome Fenoglio (in 91 he started @LeMonde when I started @lesInrocks; in 94 when he ITW Zidane, I picked up plastic glasses in a music venue. Today, months after months, he pins up his good selling scores as Le Monde Director), Luc Bronner (fake beacon of hope for #MeToo), Louis Dreyfus (claps on good scores) are not going to let a woman, me, damage their reputation...
Am I the only one to complain about their plagiarism? Not according to VanityFair!
Vice France paid the price as well, when months later Le Monde showed no shame in stepping into their footprints!
More recently, Le Monde plagiarised Harper's Bazaar which Canadian Lincoln Agnew describes as Le Monde's lack of ethic!]

In the mid 90’s, I discovered the Alternative Fashion Week in Spitalfield Market in Shoreditch, East London. At the time, few people ventured there. It was years before it suffered its gentrification process.
My first attendance there as a photographer was a complete fail: I was a newcomer, short and slim and worse of it all... a woman!
From the second day to the following years, I had to arrive earlier to get a good spot (smaller people have to be at the front) and I became known as the swearing little French lady. Press officers and organisers liked me anyway. A women gang!
Always chic, finding my niche and telling off any men trying their luck at pushing me behind. “Bleeding asshole” has always been a favourite of mine. “Kiss my ass” does its job too.

When I set up my blog in March 2013, I wanted to cover art and culture in London. A way to keep in touch with an environment I have been familiar with for over two decades as well as showing off my style (if any) in both writing and photography. A good way I thought to find a job perhaps?
I have, at first, borrowed an idea here and there from film and exhibition reviewers. It didn’t feel good but I needed to get back on the horse. At least I borrowed from people who got paid for their work. Never an entire piece... Still it is bad!

In the following months of my “start-up”, I noticed JD Beauvallet or “his” magazine Les Inrocks stepping into whatever I was doing and then launching “Les Frères James” a few months later (which must be written by him or his son) for Les Inrocks.
The French guy living in Brighton is even very proud of having “discovered” the band Algiers (I interviewed them in 2013) who became filthy nasty towards Charlie Hebdo straight after the massacre in Jan 2015! Their album became one of Les Inrocks best albums of 2015 and they played for Les Inrocks Festival that same year...
[Those interested in seeing how Les Inrocks covered my pieces, I invite you to check this piece from 5th paragraph “If you have time...” downwards (it’s not an exhaustive list, but enough to realise).]
I sent a few emails to Frédéric Bonnaud, then editor for the weekly paper. His response was an intense violent silence.
His replacement Pierre Siankowski? Complete silence. Then censorship on Les Inrocks FB page. Finally banning me from commenting / liking on its page. When? When I asked why Agathe Auproux (now Cyril Hanouna’s subject) wrote a piece on George Michael’s death from my twit!

It wasn’t enough for Les Inrocks to sexually harass me or at least let it happen (see link near Frédéric Bonnaud) or humiliate me when I worked there, they also had to prevent me from working in the field I chose and now they keep harassing me... intellectually raping my pieces! 25 years on! But for you guys reading this, I’m probably crazy!

Writing for my blog on art and culture, I sometime write on social issues. Mostly things to do with housing. A real issue in London. Dating back at least from the Victorian times, but surely WW2 didn’t help. For some, at least squatting was an option. Today, it has become a thing of the past.
I have been lucky: I lived near Marc Bolan tree; moved near Riverside Studios where I worked with its cinema director; moved near Shepherd’s Bush Empire where I waited tables; moved in a Hackney warehouse where I mastered the art of the Camberwell carrot (you will have to watch Bruce Robinson’s Withnail & I for that). Now I live in a super quiet and idyllic place, above the River Lea, facing protected Leyton Marshes where no buildings can be erected ever. Soon I won’t be able to pay my rent for my benefit allowance has been severely reduced... my next place will be the street! That’s why I voted Sadiq Khan, hoping for a change for all.

Was I surprised about the fire in Grenfell Tower? Fuck no! Surprised it didn’t happen sooner anywhere else. Convinced it will now be an excellent pretext to dislodge people quicker than expected from those “risky” towers / council flats and relocating them outside London, far up north. Not those from Grenfell though. Most of them will be re-housed in luxury flats. Am talking people in Camden, Brixton, Hackney, you name it.

Was I surprised to read Florian Reynaud’s piece on Grenfell Tower for the newspaper Le Monde? Fuck yeah! So I twitted him and Le Monde Editor in chief Luc Bronner about the similarities of my text and his, and their use of similar pictures to mine on 22 June 2017.
I was already mad that (again) JD Beauvallet was spreading alarming fake news and silly rumours (gathering a pretty fair amount of “likes” “shares” and RT on twitter/FB) on the Grenfell Tower issue. 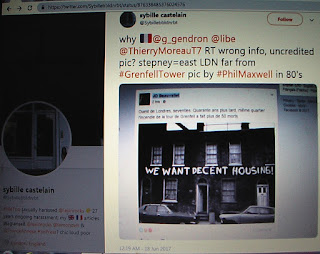 Without crediting the pic, JDBeauvallet says
it's from West London, near the Grenfell Tower, in the 70's.
Here is Phil Maxwell's website & photo credit:
Stepney, East London, 1981
http://philmaxwell.org/?p=3985 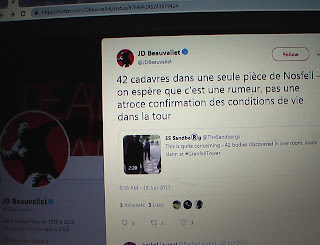 I had been previously edgy at Le Monde for mistreating / over twitting on the London Bridge attack in the night of 3 to 4 June 2017. Better pay tribute properly to the victims and helpers in this terrorist attack!

Don’t get me wrong, I follow Le Monde on Twitter and I have no time to follow some wankers. I am seriously wondering now... [as of 14.3.2019, Luc Bronner & CM team have blocked me 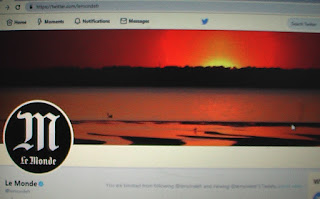 Just like any other media, if they are trying to rejuvenate their image by employing young writers / reporters, then I declare myself the young one despite being their mothers’ age!
The Golden Palm goes to “Stepford Wives” Fleur Burlet @ Les Inrocks: she helped herself on my blog like a pimp with no shame! Just left London for good now. Gal must have got traumatised at V&A Balenciaga’s PV.

I knew Le Monde had at least two London male correspondents dealing mainly with political issues. Surely, they must have known of me if they needed an extra hand to write about something? Admittedly, I am no political journalist for I know nothing and I wouldn’t feel comfortable in plagiarising the Beeb or The Guardian!
Straight after my first twit, totally gutted and in strong / quick need of an explanation I emailed Luc Bronner, even offering him some photos since I marched for The Day of Rage. As devastated as I was, I e-corresponded with someone @ Le Monde I have known for a long time, who replied quickly that Bronner should be responding (“Normalement, Luc Bronner est tenu de te répondre. Amitiés, S.” 22 June 2017).
This person has always managed to calm me down. I don’t see “it” anymore but I trust “its” wisdom.
Four days later, on 26 June re-email to Luc Bronner.
On 27, JD Beauvallet was very quick at grabbing an opportunity to twit on Le Monde’s correspondent Philippe Bernard, himself RTing it. I have never seen any social media connection between the pair of them before...
This morning, 28 June I twitted to Michael Szadkowski (Le Monde) & Alexandre Lechenet who praised Florian Reynaud for his good work asking if he was good because he knew how to copy-paste? Tagging also Luc Bronner. 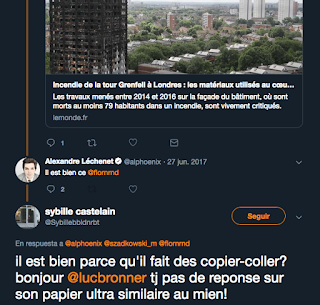 Bronner hasn’t twitted anything since 25 June. I’ll have to assume he is either on holidays or something really bad happened to him. Strangely enough, his last twit is about ‘... a man’s struggle against silence’, the world of deaf. Strangely enough, I am deaf. Almost. Silence I know and I don’t mind. But silence because some men choose to ignore a legitimate plea is also a sexist way of behaving! All of them in this issue of plagiarism!

Just because my prose / photos are out there doesn’t mean it’s free to be used. If it’s good enough to borrow, then it should be good enough to hire me decently! 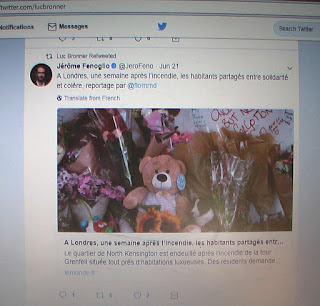 Both my age and gender shouldn’t be an obstacle! I feel extremely lucky about my outstanding genetic inheritance, my good looks, stamina and accidentally a fully working brain.
If Florian Reynaud’s article bearing a strong resemblance to mine was pure coincidental, there wouldn’t be any harm letting me know, would there?
Within a week, Grenfell Tower survivors have had more answers than I... expecting a ‘yes’ or ‘no’.

So... Florian Reynaud is writing in the name of... justice? Don’t kid yourself kid!
Sweetie darling, take a good look at Kevin Carter’s image and decide who you are... Surely, you will never ever be that photographer, reporter!

Journalism seems to become a vulture culture... where there is death, they rip off what’s available! Funnily enough, Reynaud has been friend with Agathe Auproux (George Michael “obituarist”) for... years? And his other friend is gossip storyteller Marie Turcan who, when at Les Inrocks, wrote a piece where she describes Bethnal Green as a no-go-zone... She might have disliked my prose on her after her stunt (scroll down to July 2016, white background)!
I might be a fierce defender of my work, but London is also where I belong!

Nobody should ever feel like Jessica Jason Leigh lying on a mattress in Uli Edel’s Last Exit to Brooklyn. 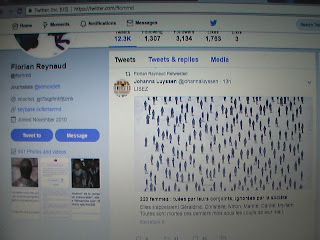 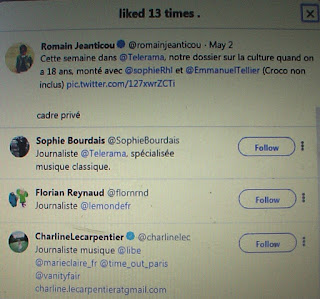 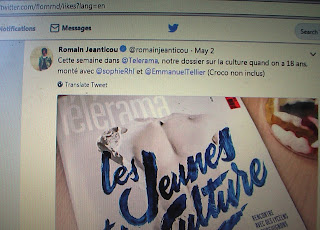 Florian Reynaud likes a post on 2 May 2018 of
Emmanuel Tellier who sexually harassed me
@ Les Inrocks
Posted by babylondonorbital at 20:21