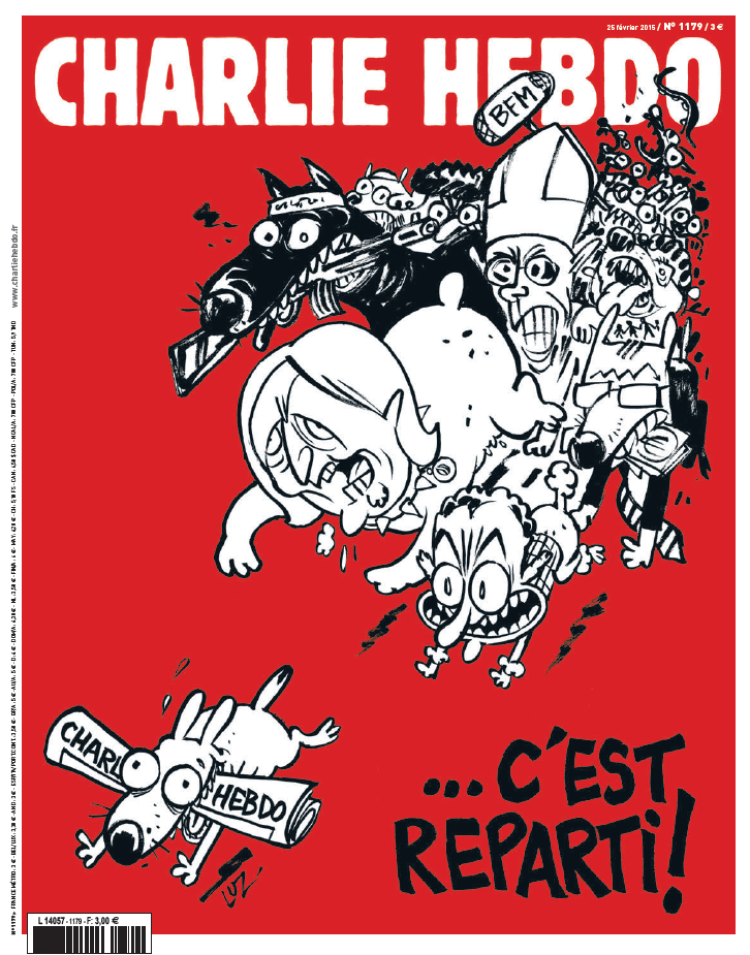 The first striking thing on the front cover is its loss of “Journal Irresponsable” underneath its main Charlie Hebdo title. Is the weekly magazine becoming responsible?

According to the blood-red front cover, it doesn’t look like it. Cartoonist Luz has got a dog (“irresponsible and submitted” – ask Luz, he said it before adding “Charlie Hebdo is irresponsible, those behind are submitted”) escaping a crowd with its Charlie Hebdo in its mouth. And what a crowd! Front National’s Marine Le Pen and Nicolas Sarkozy at the forefront of the march and a horde of “hors la loi” (outlaws) somehow representing the population and dogmas of France. Or, let’s put it right: those that France can live without!
If you wonder about the BFM mike... while people were hiding in the small supermarket on the 9 January high jacked by one of the terrorist Amedy Coulibaly, TV station revealed on-air about the hiding. Coulibaly who was listening to the news had just missed it thankfully.

Six weeks on hold. The team had to readjust from the carnage that happened on the 7 January and their last issue published on the 14 Jan. Sort of... How do you readjust in such a short time? Riss is now replacing Charb as the director of publication. Riss was also hit by a bullet that went through his right shoulder and was lying down next to Charb. When Riss is not spending time at hospital, he is at Charlie Hebdo on constant high protection due to a fatwa against him. But, as he says, life goes on and this is what the front cover new issue is all about: criticising the bullshitters! Two cartoonists have joined the team: the Algerian Dilem and Pétillon from the Canard Enchaîné. So, what’s inside the issue? Dominique Strauss-Khan trial, an interview with Yanis Varoufakis, the killing in Copenhagen, five teens held after vandalising over 300 Jewish tombs in Alsace, etc.
2, 5 millions copies are being printed.