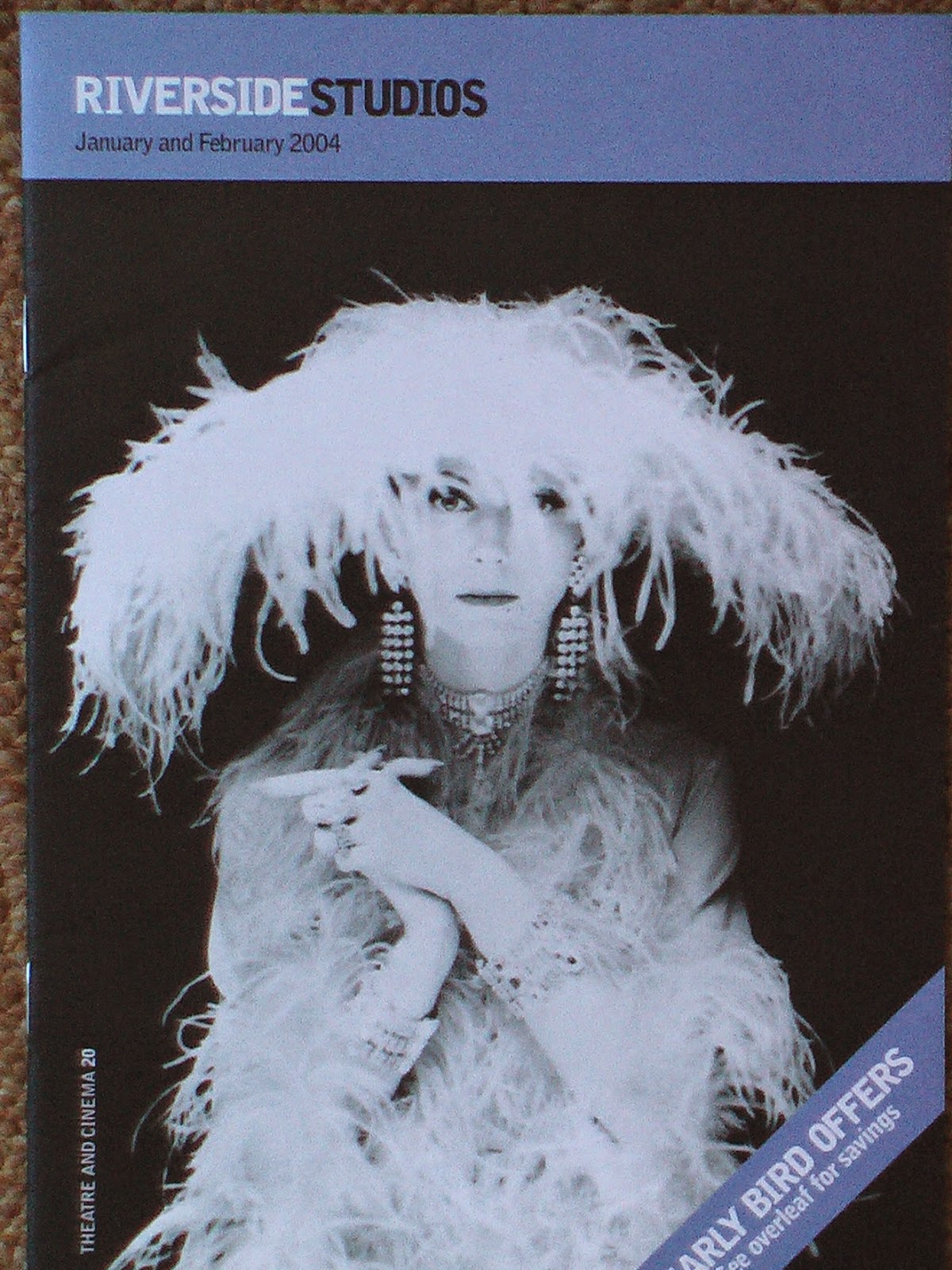 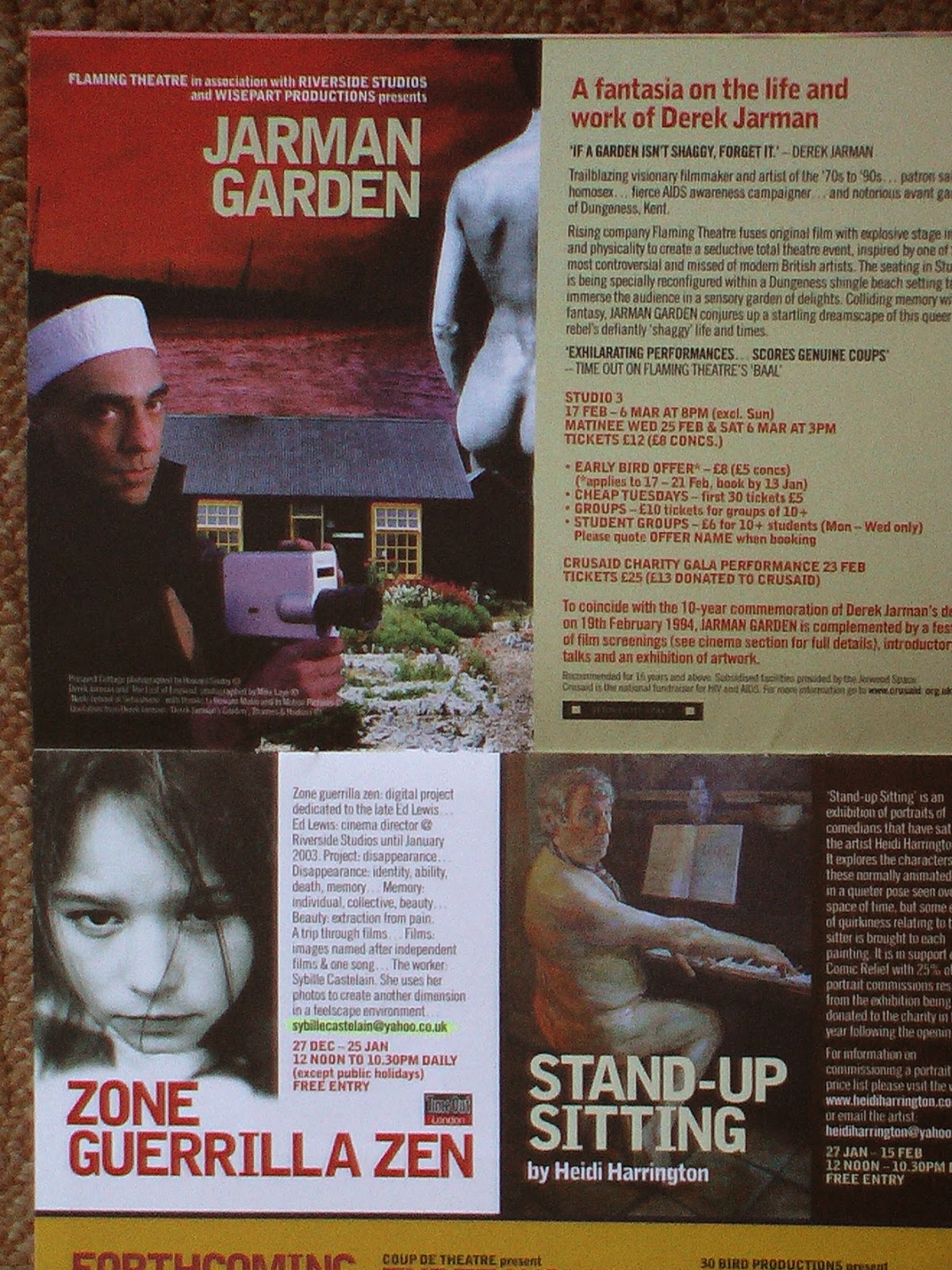 ... Any regrets since you started the blog?
Sort of regret... I regret I had to take the decision to stop working with BFI Northbank. I thought about it in many ways but I asked my contact to stop sending me DVDs and invites. It really hurts because I do like their stuff and think it’s essential BFI exists, but on a personal level and according to my own little logic I couldn’t possibly continue working with half of the BFI, feeling deeply that Southbank was acting either as racists or at least being profoundly discriminatory. I felt I would have silently supported their “south” actions + I wrote to Head of Comm to get an explanation, but got no replies. Why I couldn’t do the Jarman season or write about African Odyssey is a mystère! Believe me, I am good at insisting... But I don’t regret my decision. They have to explain. Of course, they can pose with Afrika Bambaataa and smile on pictures. I even gave some dates to the young press officer, so we could meet and talk: dates of films I bought tickets, but she must have decided I was not worth it! A shame because, on a personal level BFI is a continuity with my involvement with Riverside Studios up until Ed Lewis’s death and my exhibition Zone Guerrilla Zen on his first anniversary’s departure; supported by Time Out, via Geoff Andrew’s contact. 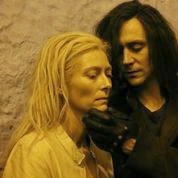 Any favourite films?
Only Lovers Left Alive. I think it might even be my favourite Jim Jarmusch. I recently re-watched Dead Man, a film I saw in 1995 @ the NFT1 and I didn’t like it. I don’t think at the time I grabbed Jarmusch’ capitalism denouncement, racism and how society transforms a well willing man into a wolf for man! On the surface, it’s very much about poetry, landscape, “slow motion”. It’s interesting how these two films are so similar. But OLLA is magnificent.
I thought 20000 Days On Earth was a great film too, but as months go by, it’s fading already. I would be curious to know how the film “scored” in other countries. I can’t imagine it working well in France or Spain, or Italy: the English press release was very good but I think it would have to be rewritten/re-thought in other languages.
I loved Winter Sleep very much, but I am not sure why it won the Palme d’Or. There is something cold and beautiful and slow à la Bergman... Ok, I wished Xavier Dolan had won!
Hockney was a marvel, but David is a great story teller in the positive sense of the phrase.
For the DVDs, the Alain Robbe-Grillet collection by the BFI: a great discovery that blew me totally.
I wish I could add, but film distributors or their press office are playing very shy... so I have little to say in comparison to the myriad of films / DVDs that were released in 2014. Someone like @SophiaSB1 is luckier than me and I love the way she gets inspired by my blog on many levels, but I’ll give only one example: JLG / cinéma vérité or Jarmusch Night On Earth for her 20000 Days On Earth on her @grolschfw review. Perhaps in 2015, film press officers might want to suggest some films and invite me rather than send me vimeo links... I guess they want me to save a bus journey!

Erm... Music?
As my friend says, it’s a circus... but how can I pick up one out of what I received? Fire Rec only contacted me twice this year: each time a week before a gig and sent me a downloadable album that was released months before. So I asked them to either treat me as anybody else in the music bizz or delete me from their press list. They chose the latter. I followed them on FB and I usually like what they don’t send me... But we haven’t met, so she doesn’t know me.
Drag City has great releases. But their accountant and its Lauren Unable are as great at inventing stories. They fit well in the circus, shame!

Exhibition?
I think I have to applaud the V&A. As a major institution, they could relax and show “easy” stuff, but they just don’t. Their exhibitions are carefully researched and rich in knowledge. Plus, they are the only ones (to my knowledge) that make it easy for disable people, or at least for hard of hearing / deaf people.
In terms of photography, Conflict, Time, Photography is a must see, a new way of looking at conflicts. Still on is Egon Shiele and am looking forward Goya at Courtauld.
London is blessed with exhibitions. I wish Time Out would come back to their list of exhibitions rather than their “Must-See” list: they have the space and I guess the staff. Time Out was my bible because it taught me a great deal of London and its Things to do stuff. Now, it’s too patronising, too selective, leaving out the hidden gems. We used to have a love-love relationship... 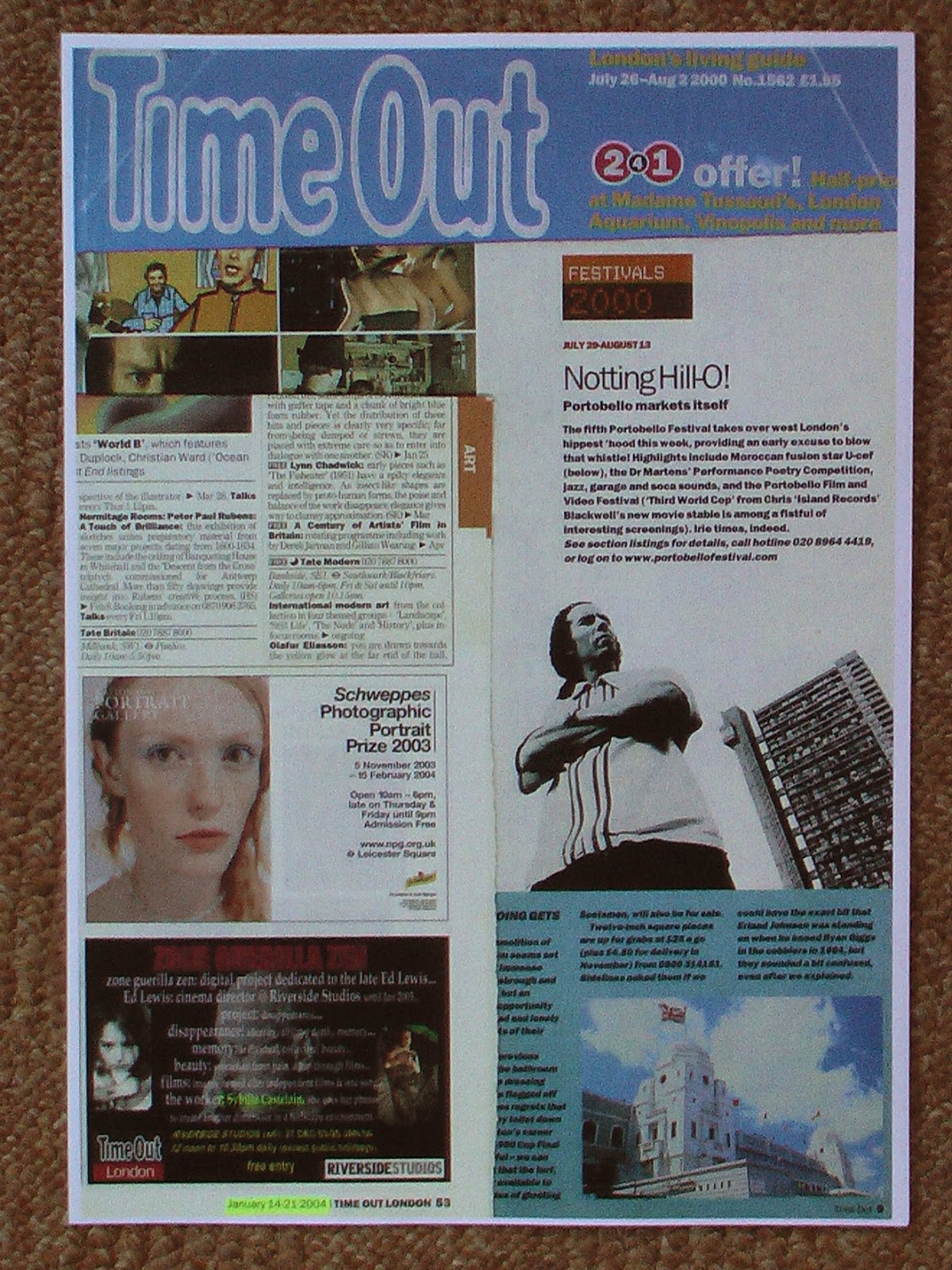 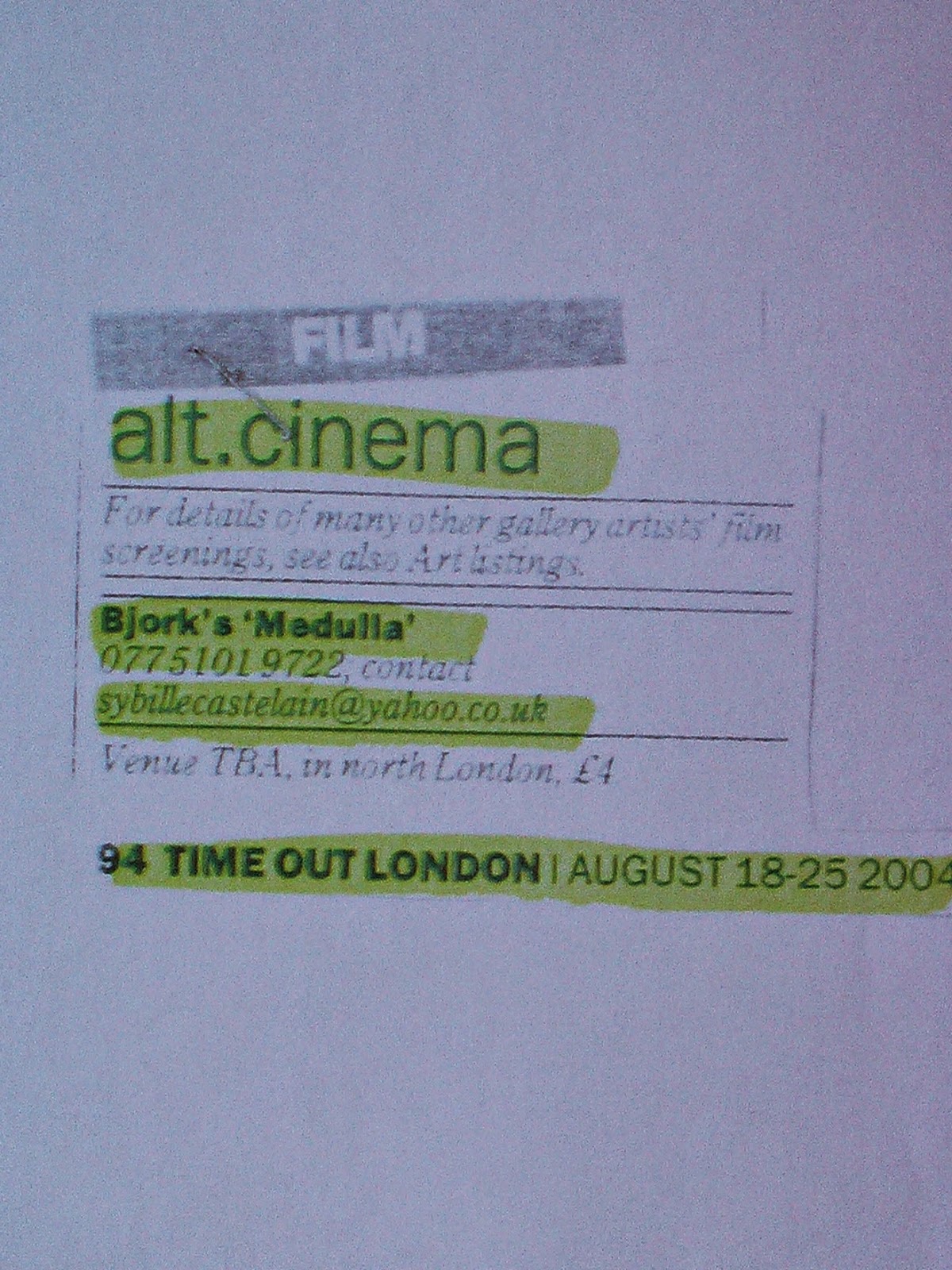 Festivals?
This is a sore point... I have contacted hundred of films, music etc festivals. Feminist film fest replied they had enough (mainstream?) coverage and the rest simply ignored my quests. Almost... Lift 2014 and Anxiety Festivals were excellent. Anxiety, for its first edition was near perfection in its selection. I have discovered an extremely rare gem Pressure by Horace Ové. Oh and Tarkovsky’s Solaris, my first time! Yeah yeah yeah, I have Jarvis Cocker playing within my brain “Do you remember...”

Any resolutions?
“What are you implying? That I need to change? Well, buddy, as far as I’m concerned, I’m perfect the way I am!” (Thanks Calvin of Calvin & Hobbes). More seriously, the world needs to be changed, not me! But if we could fix the United States of Da America first, we might be sorted... While we wait... we have to sort out the homeless situation worldwide! There is no need for anybody to sleep in the street unless it is some people’s will. Banning them from some London boroughs or caging benches in France are adding up to the problems but not resolving anything!
Disability is another issue. Such discrimination, rejection, less opportunity, ignorance... This is perhaps the worst: valid people who dismiss less able people out of their prejudice.
Women... I’ll stop here, but if you want me to rule the place, follow me @Sybillebbldnrbt, I’ll be a great leader, I was born the same day as: Cara Delevingne (we are almost twins), Samuel Fuller, Cecil B De Mille, Francois Hollande. But Leos like me include (apart from most of my family – tis in my genes) Barack Obama, Napoleon Bonaparte, Fidel Castro, Bill Clinton, Hitler (just kidding), Madonna, Thierry Henry, Edward Norton, Mick Jagger etc.
But then again, if people follow, I’d rather have them to participate more than being contemplative or being a voyeur.

Anything you look forward?
Alexander McQueen. It’s going to be massive at the V&A, but also at Tate Britain and ShowStudios. Watch this space...