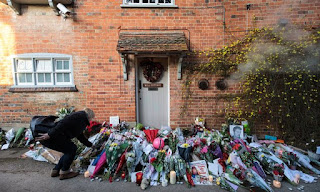 Photo from Getty Image taken from The Guardian’s web
Floral tributes outside the Oxfordshire home of George Michael,
where he was found dead on Christmas Day.
Photograph: Jack Taylor/Getty Images

Late summer 1984, I arrived in Verdun, a French town where everything is a reminder of WWI. If you are a native walking around, Monuments aux morts are just like passing by Trafalgar Square. It’s there, part of the landscape... a bit heavier though!
I was returning from Djibouti in East Africa, so the school transition was a bit of a challenge weather wise. From up to 80ºC to minus 20ºC. I’m sure you will understand my music tastes were on the cold scale, cold wave, post punk and anything a bit freezing.

I knew your tunes because my mother listened to RTL or RMC always. The radio was on 24/7. Although my English was primitive, Wake Me Up Before You Go-Go I knew almost by heart. Not that I liked it, but it entered my brain at dinner time. Talking was not all the rage at home, listening to the radio was the best option. You should have seen my mother doing the washing-up pretending she knew the lyrics. Priceless! It worked while cooking or dusting too.

It’s at the French lycée I warmed to you. Careless Whisper. There was a juke box (or perhaps was it a boom box?) in the students common room and in the autumn, at lunch breaks, someone kept playing Etienne Daho’s Week-End A Rome followed by your hit and then Sade’s Smooth Operator, a daily basis treat for a few weeks. Lots of memory in that sad but full of surprise’s town.

You, like Madonna, Prince, Michael Jackson, Boy George, Carmel, Duran Duran, Alain Bashung, Elli Medeiros, Dead Or Alive and so many more were always present in my life even though I would only buy Etienne Daho’s LPs. It’s what you guys eventually represented that I respected. How you guys achieved your goals despite the discrimination: being black, gay, bi, a woman, a proletarian.

Yesterday, 26 December, when I learnt your passing, I wanted to celebrate your philanthropy, your generosity, your commitment to those suffering and your humour. So, I tweeted @ 8AM GMT your cameo for Little Britain and Comic Relief. Having worked for Les Inrocks, I knew they had no interest in you, but I don’t trust their “innocence”, so I waited for my second twit on you in bed with Ricky Gervais an hour later. I mean they are plenty of moments of you being funny and charitable...

Two hours after my first twit, Agathe Auproux of Les Inrocks wrote about your cameo on Comic Relief. A "cult" moment according to her (there are so many)! Couldn’t she write on your philanthropy or generosity in general? A longer article? Perhaps she had some dusting and washing-up to do? [Les Inrocks/Agathe Auproux might have realised it is not a "cult" video anymore and dropped the word "culte" recently in March-April 2017: showing off their ignorance and vulture attitude]

Half an hour before that, the magazine that might not have much to say about you started its rave on you: a collection of music peeps on twits (2K views on FB) – well, they do observe twits don’t they? They are journalists.

Same time as Agathe Auproux, an “article” on your performance with Stevie Wonder (1.3Kviews on FB).

2pm GMT, the most honest article on you, wrong title though “icone queer”! (over 700 views on FB).

If Les Inrocks really wanted a “cult” moment, why not chose a French one (no translation needed) and talk about Thierry Ardisson and George Michael in Tout le monde en parle. What a profound and honest interview!


If Les Inrocks had really wanted to celebrate the singer in an alternative way, why not talk about Wake Me Up Before You Go-Go sleeve’s design... no less than Peter Saville (Joy Division, New Order, King Crimson, Roxy Music, The Monochrome Set, OMD, Suede, Pulp, David Byrne & Brian Eno, etc.)?
Or talk about an anecdote (true or half true) of one of their fav band The Smiths who wrote an "angry" song Panic on Wham! being played on On BBC following a news report about the Chernobyl catastrophe.

How many people have commented on FB reminding Les Inrocks about the crass they said about you in the past? All comments deleted, including mine. They are simply vultures, gathering clicks for their advertisers! Death is saleable...
Because I spoke my mind politely though on their FB page, Les Inrocks have blocked me from commenting any further on their future posts. The magazine that defends #FreedomOfSpeech, the magazine that sexually harassed me, the magazine that makes sure I’m out of business!
Pierre Siankowski, Les Inrocks's editor prefers to block me on Twitter rather than sorting out anything...

How many front covers have you made for Les Inrocks George? I can’t find any in their 30 years of existence! Perhaps I’m wrong? In 2014, they wrote about you, not in very good terms...

It is understandable to pay tribute to a dead artist, but being OTT as they have been with no tracks of respect for you in the past is pretty dubious!
What’s next? An edito by Pierre Siankowski saying how much he loved you and how his magazine acts on integrity? An angry, faithless vulture he is, making money on death! What a great year it has been for Les Inrocks... so many musicians have died!

I told you George, I wish I hadn’t written this prose. Wherever you are, here is a nice and informative piece on you from BBC.