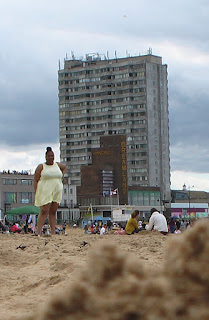 Miranda Priestly would say “That’s all” and you would freeze in utter panic...

The good news is that someone entered some of my posts into some sort reward / competition and I got selected for a prize / reward in journalism.
I can’t be bothered too much but it’s nice.

I set up this blog to write only about art and culture and I ended up writing about things that were not meant to be here.

Too many years of being copied or strongly imitated by Les Inrocks and possibly by others publication...
Eventually, when newspaper Le Monde via Florian Reynaud used my post on Grenfell Tower... that did it to me! Following my text on silence as a mean of sexism, Reynaud was mocking “innocently” my sexual harassment!

I got so sick, I looked for a razor blade and became so depressed for not finding one... when I sat on my sofa, I had received an email by Samuel B who comforted me: Luc Bronner was going to give me an explanation... He never did! Jérome Fenoglio never did either...

This is the price to pay when women get sexually harassed and fuss about it some 25 years on!
Emmanuel Tellier is a criminal and so is everyone treating him like a poor victim or saying I’m inventing stories, talking rubbish!
There is a huge amount of people in Le Monde following him on Twitter... a lot more than in Les Inrocks / Telerama altogether where he worked / works.

I took a day off (not that I can afford it) and decided while I was away that I should set up another blog to have peace. I did but I still find it disgraceful that I have to re-organise my life in the same way I left France in 1992 (despite being offered jobs at Nova & Les Cahiers du Cinema) mainly because I didn’t want to come across that abusive manipulator!
As long as Les Inrocks don’t admit the ordeal they allowed me to suffer within their premises, my life is going to be hell. I feel dirty!
As such I have also decided, calmly, that there is no point sitting here contemplating people stealing my prose or my ideas;
There is no point in being alive to pay my winter bills while I’ll see from time to time my style in Les Inrocks or Le Monde, or anywhere else;
There is no point in being alive to work in some venture I have no interest just because eventually I’ll have to be a sales assistant or a cleaner as it has been suggested;
There is simply no point in struggling!
Nothing sad now, just fact: 25 years of ongoing harassment; last four years of being stalked online/social network at least! For you, I’m paranoid, crazy and defamatory. OK, you win!

Good job Le Monde, Les Inrocks and whoever for disrespecting people’s work... and past!
Good job Liz Parkinson @ BFI and any PR for discriminating!